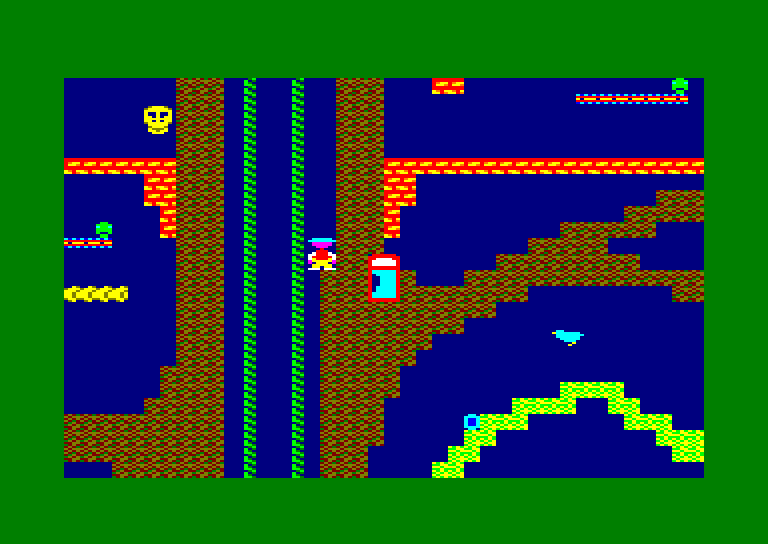 Roland in Space is a 2D scrolling platform game where you play a lord of time who must travel to seven different planets and collect the 158 components of the ARNOLD super-weapon. Once complete, this weapon will allow Roland to defeat the evil Maestro and save the universe. The game is a direct sequel to Roland in Time and has similar game-play and mechanics.

The player can choose which of the seven worlds they wish to explore from the planet screen. Roland then appears from out of his phone-box like space-ship on the selected planet and can start collecting weapon pieces, represented by flickering blue orbs. Roland can move around the screen using left, right and jump keys. Other keys allow you to scroll the screen independently of moving the character. The landscape is odd in that some of it allows Roland to walk and jump through it and prevents him falling. Some other areas will collapse under him as soon as he walks on it, and there are even invisible semi-solid areas that slow Roland's rate of fall, but will allow him to gain height by continually jumping.

Roland starts the game with nine regenerations, but these will easily be lost to fast moving enemies, inconveniently placed traps and falls from reasonable heights. Once all of the weapon fragments on a planet have been collected, the screen flashes. At any time, Roland can return to his phone-box and so back to the planet screen. The collected weapon parts do not re-spawn when the planet is visited again, but the rest of the level does refresh.